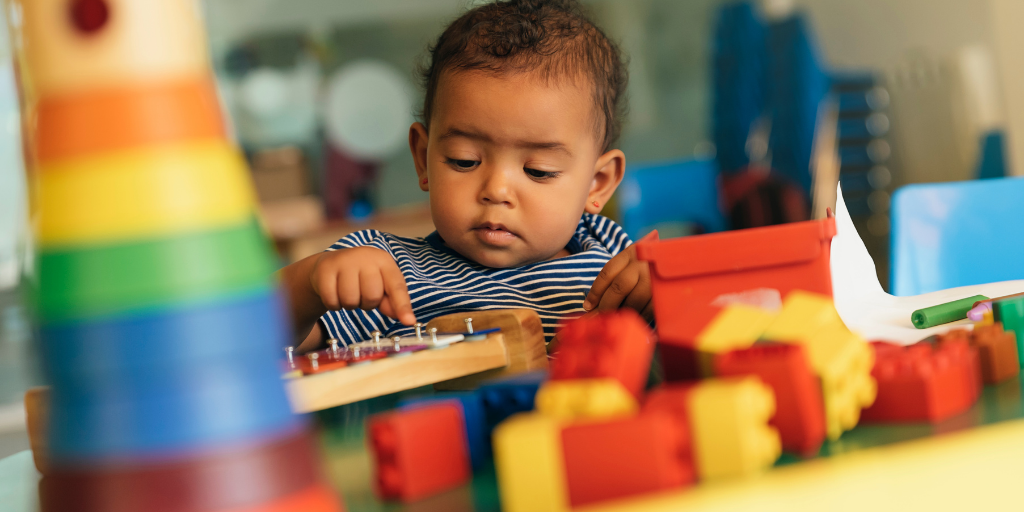 Elinor Goldschmied was born on 15 December 1910 in Gloucestershire. One of seven children, she and her siblings had the freedom to explore and play imaginatively with natural materials in the family’s large garden. In an interview in 2001 Elinor commented; “My siblings and I spent hours of our time playing with mud, water, stones, shells and leaves; all the natural things. Every single thing became an element of interest”.

Elinor was home schooled until the age of 12 when her mother passed away. Following this tragic event Elinor went to live with her grandfather in Bristol and attended the Clifton High School for Girls and then the Froebel Institute in Surrey where she trained to become a nursery teacher. The ethos of the Froebel approach encouraged Elinor’s passion for nature and creativity.

Elinor’s first job was at the Darlington Hall Junior School. Considered a ‘progressive’ school it suited Elinor’s beliefs and approach, focusing on experiential learning, enabling children to lead with the role of the teacher to encourage self-expression. Elinor stayed here for five years.

In 1937 Elinor attended the London School of Economics on a scholarship; she studied mental health and graduated as a psychiatric social worker. It was here she met her husband, Guido.

During the second world war Elinor was working with a group of evacuated and refugee children in Bradford. Considered to have unmanageable behaviours, Elinor put into place new structures and routines for the children which resulted in calmer behaviour. The principle act was to place the children into smaller groups, where previously they had been one large single group, with a consistent adult to support and meet their needs. This approach formed the basis for her future work and supports what we now refer to as the key person approach, the importance of which is reinforced in our practice through the Early Years Foundation Stage (EYFS) Statutory Framework.

In 1946 Elinor, Guido and their baby son Marco returned to Guido’s home country of Italy. Here Elinor visited a number of orphanages and was shocked at the lack of human contact and play opportunities these children had.

In 1948 Elinor began working with Elda Scarzella who ran a home for single mothers and orphaned children, an institute opposed by the catholic church. Elinor led on nursery education and staff training building on what she had implemented in the UK and in the orphanages to secure human contact and access to materials for play. It was during this time Elinor wrote her first book ‘Il Bambino nell'asilo nido' (The Child in the Nursery) which focused on the group care of young children.

In an interview in 2002 Elinor spoke of her observations and activities at the home and she explained: 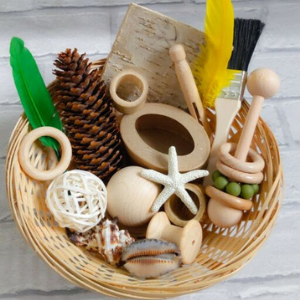 “These babies in their cots were ‘closed off’ and when I offered them an object they reached, then drew their hands back. They just couldn’t cope. Eventually they managed to pick up an object with enormous caution. I then began to look around the environment for other objects. These objects were my first collection so I did the Treasure Basket in a context…..having play material became part of the daily routine…..the staff began to have relationships with those babies too. We were able to reduce the crying and anxiety." (Goldschmied, 2002)

It was during this time, as the quote tells us, the treasure basket was created. Originally intended for babies aged 7-12 months treasure baskets are, as the name suggests, a wicker basket filled with a range of everyday items made from natural resources, for example, a large feather, metal whisk, measuring spoons, rubber tube, bottle brush, fir cone, sponge, seashells, bunch of keys, pieces of fleece, nail brush, woollen pompoms, wooden spoon. The basket itself should be flat bottomed and sturdy enough for a seated baby to lean on but not to tip up.

Elinor returned to England after the death of her husband in 1955, taking a position with London County Council in 1960 as an education social worker. It was in this role that Elinor further explored her commitment to children’s play through observations of babies and how their independent play supports learning, an approach in keeping with the EYFS and specifically the characteristics of effective learning. This resulted in the development of the heuristic play theory, encouraging the adult to be the facilitator and observer but not an active participant.

Following her retirement in 1972 Elinor continued to consult both in the UK and Italy and in 1994 co-wrote the book ‘People Under Three: Children in Daycare’, with Sonia Jackson.

Consider your own practice; where are Elinor Goldschmied’s theories evident? Do your children, especially the babies, have the opportunity to lead their learning?

If you enjoyed this blog, why not find out more about the support provided to early years settings, schools and childminders by our Early Years and Childcare Service.

How to Become a Childminder