Within The Education People we are very fortunate to have two Makaton Regional Tutors, who work in the Early Years Equality and Inclusion team. The core work of the team is to offer a programme of advice, support and training to promote and enable equality and inclusion and to narrow gaps in achievement. Makaton can play a vital role in supporting the development of communication, which is the foundation of relationships and is essential for learning, play and social interaction.

For those of you who haven’t heard of Makaton, or who have a vague idea but are not really quite sure, Makaton is a language programme that uses signs, symbols and speech to help people communicate. Signs are used with speech, in spoken word order. Using signs can help children and adults who have no speech, or whose speech is unclear. With Makaton, children and adults can communicate straight away using signs and symbols.

We’ve had an exciting time over the past year or so as we’ve been busy training over 100 practitioners in our Makaton workshops. Although our largest client base is the PVI (Private Voluntary and Independent) sector with whom we work every day, we have also welcomed participants from further afield in neighbouring counties, such as a speech therapy assistant working in a primary school with an attached communication and language unit, and a staff member who works alongside adults in supported living accommodation, both from Sussex.

In addition, we’ve delivered a small number of bespoke trainings to support schools/settings with a specific child in mind, such as a child with Down Syndrome.

Whilst we are able to offer the full range of Makaton Workshops, our most popular training is the Makaton Beginners’ Workshop, which provides a great starting point and a firm foundation for developing Makaton knowledge and skills, as it introduces participants to a core vocabulary of the most commonly used signs and symbols in a two-day workshop that is very practical and interactive. During the workshop, participants have plenty of opportunities to practise their newly learnt skills so that they can be confident to return to their work or home environments ready to go with Makaton. Alongside the practical elements, participants also learn about the history, design and structure of Makaton. They have the opportunity to explore why and how the Makaton approach supports communication for all and how to tailor the approach in flexible ways to meet individual needs.

Our Regional Tutors are committed to continued professional development, attending Makaton study days annually, and engaging in Makaton Tutor Network meetings to make new contacts and share professional expertise. Additionally, we have recently attended a training on using Makaton with singing, as a result of which we will be offering a fabulous new course in the New Year.

Over recent months we’ve taken opportunities to strengthen links with the Makaton Charity and in October we were visited at Worrall House by the charity’s new CEO, Stephen Hall. Our Early Years Equality and Inclusion Team Manager, Sue Smith, and Stephen discussed several ways in which Makaton and The Education People could work together in the future. Watch this space! 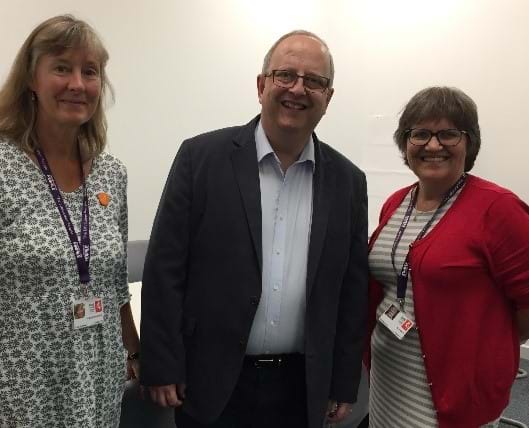 By The Education People
Read more